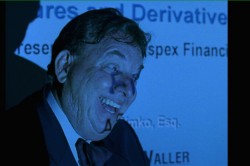 To impress a disenchanted client, a desperate group of lawyers hires an untested office temp to create a winning presentation -- overnight. The surprise results impact more than just the deal at hand. "Futures (and Derivatives)" has been called "an ode to the endless possibilities of office supplies" and gently celebrates beauty, New York City, and personal transformation, revealing the true and secret powers of PowerPoint.

Arthur Halpern is a filmmaker, actor, director, writer, producer and graphic designer. After graduating from Wesleyan University, Art spent a year studying and performing at Actors' Theatre of Louisville. He has acted extensively with some of New York City's most celebrated Off-Off Broadway theatre companies, including the acclaimed adobe theatre company (of which he was a member). Art has also appeared in several independent films and 2 (very special) episodes of Law and Order. Presently Art makes his living as a designer and marketing communications manager for one the world's largest law firms. He lives in Brooklyn (where he was born), and is writing his first feature-length screenplay.

Director Arthur Halpern will be available for Q&A after the screening.