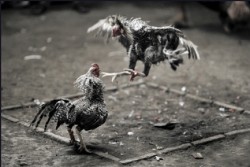 In Bali, during certain ceremonies, blood must be spilled to pacify the bhutas, the evil spirits that live underground. A cockfighting arena is built next to the temple. The judge strikes a gong; the fighting starts. The beginning of the ceremonies is marked by the incantations of the priest. The cock's dance of death is accompanied by the rhythmic music of the gamelan. The noisy excited chattering of the men gathered round the ring sounds like the chorus heard at the Kechak trance dance. The aroma of incense mixes with the smell of blood.

During a trek in Cuba in December 2000, Carl Valiquet spent a week among a group of young Cuban boxers. He emerged from this voyage with a series of black & white images to which he added Havana's urban sounds. The result of which is a short film titled: "El Ring". After this experience Carl Valiquet, an advertising and travel photographer since the early 80's, began creating films using a combination of still images and moving images. Carl Valiquet was born in 1946 in Montreal, Canada.

Director Carl Valiquet will be available for Q&A after the screening.