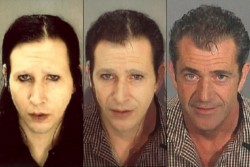 One hundred celebrity mug shots morph into one another. A minimalist electronic soundtrack heightens the hypnotic effect the images create.

Artist/Musician/Filmmaker Ronnie Cramer has been active in the arts community for over thirty years. His paintings have been exhibited in galleries and other venues across the country, his music has achieved airplay on over 100 radio stations nationwide and his critically-acclaimed films have been screened at festivals around the world. He has also been featured as a guest lecturer on art and media at numerous museums and universities.