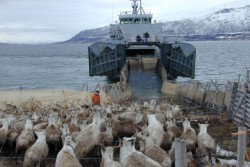 (Reindrift i kamp)
US Premiere

Military authorities want the Oskal family to slaughter their entire herd of 2,000 reindeer and abandon their traditional way of life in the arctic wilderness. Their reindeer herding grounds are already being used by NATO forces to practice "international conflict resolution" tank maneuvers and to test "peace-keeping weapons" with live ammunition. Now the military wants to expand the firing range, creating an uneven battle between the native Sami people and the Norwegian defense department and NATO. Will Tore Oskal and his clan of 30 family members follow their neighbors and accept the offer, slaughtering their herd? Or will they defy the military and encroaching developers to preserve their land and their way of life?

Svein Andersen and Karl E Rikardsen both have experience as directors of documentaries, shorts and feature dramas. They have collaborated on several films but this is their first time as co-directors.

Directors Svein Andersen and Karl E Rikardsen will be available for Q&A after the screenings.