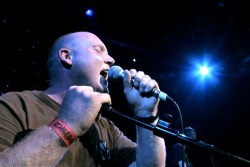 Heavy Load are Lewes' answer to the Ramones, a punk band subject to the usual inflammatory mix of ego, fantasy, and desire. They're also, uniquely, made up of musicians with and without learning disabilities. The bands' survival is a precarious negotiation between two different worlds: on the one hand the institutional timetable of day centres, work placements and social workers; on the other the chaotic slacker life of rehearsal rooms, studios and gigs. Home life and band-life; from invisibility to stardom of a sort and back again. But this is not a film about a young band on the road to making it. Specialising in thrash covers of late 70's punk - or punk versions of recent pop, Heavy Load are unlikely to have a top ten hit. "We like to take a classic song" says guitarist Mick, "and crucify it." Their cacophonic reinterpretation of Kylie's 'Can't Get You Out Of My Head' possesses a frenzied anarchy that bears no resemblance to the disco original. Their howled version of the Troggs Wild Thing adds a psychotic menace that makes you forget that this was once a love song. On stage the band fizz with energy, attitude and sheer volume. Shot over two years as the band record their first album, the film is a comedy of conflicting ambitions, as the band move out of the ghetto of disability club nights to test whether their dreams can survive in the mainstream.

After ten years as Producer-Director of broadcast documentaries with a focus on arts, mental health and education, Jerry Rothwell co-directed (with Louise Osmond) the documentary feature, "Deep Water" (Pathe/FilmFour/UK Film Council), released theatrically in the UK by Pathe in Autumn 2006 and by IFC in the US in 2007. "Deep Water" won best feature documentary at the 2006 Rome Film Festival and a Grierson Award for best cinema documentary 2007. Directing credits prior to this included "The Late George Shaw" for Channel 4's Art Show, 'Modern Painters' for Channel 4 and 'Fact Plus Fiction' for the Arts Council/Channel 4. Jerry is now in pre-production on "The Great Ethiopian Run" and "How To Change The World", a film about the early years of Greenpeace.