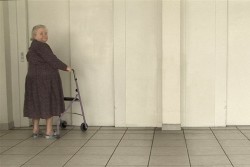 THE END FOR BEGINNERS

In a retirement home in Paris, the elderly residents wait out their last days. Nothing much happens other than the odd bout of Muzak and trouble with the lifts. But the arrival of some unusual visitors is about to disturb their peace - and set the scene for a strange confrontation between those at the beginning of life, and those at their very end.

David Lale started making his own films as a distraction from a soul-destroying day-job cutting docu-soaps. David is also a writer, and his first book was published this summer.