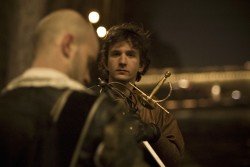 Paris, December 31st, 2007. Arthur, his friend Clément and Clément's sister, Constance, are going to a fancy dress party. Planning to declare his love for Constance, Arthur's plans are thwarted by the unexpected arrival of a dark admirer: an aggressive guy against whom Arthur and Clément are forced to draw their swords...