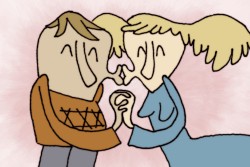 A love story so backwards it has to be told in reverse.

Aaron Hughes lives in Brooklyn and has been working on animation projects, commercial and independent, since his graduation from the School of Visual Arts in 2003. He also is now an adjunct professor at New York University and Pratt Institute.

Director Aaron Hughes & Producer Lisa LaBracio, will be available for Q&A after the screenings.