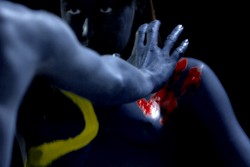 Nocturnal-blue figures move through a dark, abstract landscape, their motions jerky and sharply-awkward - animated sculptures as dream and trance-like inscapes of the living. Three dancers, formerly with the Staatstheater Darmstadt's company, are the protagonists of this surreal film. Its spell-binding allure stems from use of the pixilation technique, whereby the dancers dramatically slowed down their movements - to one step in two minutes - and the thousands of stills taken of them were composed into the alienating sequences we see. The result resonates as a 12 minute-long chord composed of movement, minimalist sound and shimmering colours; a mythical drama of archetypes "die Androgyne, die Weibliche, die Starke" [the androgynous, the feminine, the strong] (Simon Rauh). Yet for all its enigmatic nature, the film is steeped in the great cinematic mysteries of Departure, Discovery, Self-discovery; Danger and Suffering; Drama and Tragedy. An atmospheric nocturne, the film has a hypnotic, reverberating lure - and is aesthetically a delight.