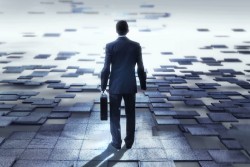 Marc needs the paving stones on which he walks to move, for fear of stepping on the lines. He starts a treatment to overcome his phobia...

Bif is a directing collective incubated within the studios of The Mill in London. It comprises Fabrice Le Nezet, Francois Roisin and Jules Janaud, all having graduated top of their class from world renowned French animation school Supinfocom. Before the partnership began, this trio of animators had already independently directed award winning graduate films. Raymond, their first short film together as Bif, was selected in more than 70 international festivals and won several awards. DIX is their second short film.