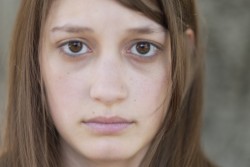 Cryptic is a thriller that takes place in a land we call a slacker Twilight Zone. With her life at a dead end, 19 year-old Jessie finds her old cellphone and uses it to communicate with her younger self. As she changes her past, she changes herself...but now she's wiped away all her old memories ... until she finds the phone again and a very cryptic message...

John Weiner & Danny Kuchuck are NYC guys who moved out to LA and have made a living as a screenwriting team. This is their first chance at directing one of their scripts after years of seeing their screenplays, written in blood, sweat and tears, abandoned before moving into production and then promptly getting tied up for eternity by studios with lots of money.

Directors John Weiner & Danny Kuchuck will be available for Q&A after the screenings.