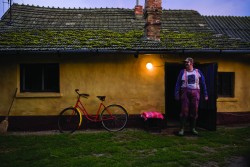 The Dinner revolves around a day in the life of a small rural Hungarian family during the riots of September 2006. The day starts when the adult son of the family slips and falls during the morning feeding and is laying unconscious in the pigpen. The town also wakes up and goes about its business, but without anyone noticing. The constant radio chatter brings the outside world in, echoing the cultural and political pulse of Hungary. As the day ends and the sun sets, the story also unwinds -- but not without the proverbial irony we know life to be.

Born in Budapest, Karchi Perlmann began his career as a professional photographer. He launched his film career by producing and directing commercials and music videos. In 1998 he produced his first narrative feature film entitled ROSE'S. He followed up with two subsequent feature films the latest of which was the critically acclaimed BROKE SKY. DINNER marks Karchi's writer/directorial debut.