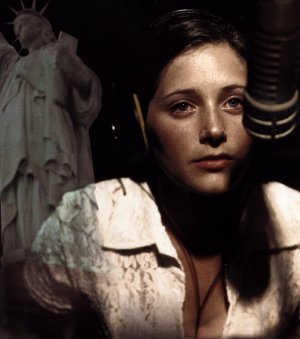 ONCE WE WERE STRANGERS

It is a charmingly unpredictable and all-too-real modern romantic comedy about two couples set in the disarming hodgepodge of New York's colorful ethnic neighborhoods. Antonio is a seductive and charismatic Sicilian living illegally in New York. He wanders from job to job, lives as a squatter, and enjoys a romantic tryst with a wealthy art dealer. When he falls in love with Ellen, a strong willed radio talk show host, who's moving to Paris a few days later, he decides he must find a way to keep her from leaving. Despite Ellen's valiant attempts to resist Antonio's undeniable charm, his humorous and romantic courtship begins to win her heart. Meanwhile, Antonio's friend, Apu, faces love challenges of his own. He works hard, picking up whatever odd jobs come his way, only to have his life uprooted on the day his pre-arranged wife arrives in New York from India. Once We Were Strangers is about what happens when cultures clash. It's about expectations and reality, dreams of love and money, and life when the timing is way off.

Emanuele Crialese studied film at the University La Sapienza in Rome. In 1991, he came to New York to study film at NYU, where he won the prestigious WTC scholarship. He wrote and directed Heartless, which won nine awards, and was screened at the 1993 West Coast Showcase of Award-Winning Student Films at the DGA. He is currently writing a dark comedy, scheduled for pre-production later this year.