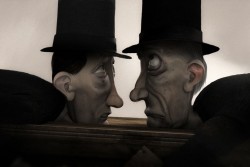 Laying the dead to rest has never been so much trouble.

Alan Smith & Adam Foulkes graduated from the Royal College of Art animation course in 1997 and teamed up with producers Chris O'Reilly and Charlotte Bavasso at the Nexus studio. They have gone on to develop a reputation as one of London's top animation directors and their portfolio spans short films, music videos, commercials and film title sequences. Credits include the film title sequence for THUNDERBIRDS and an animated 'film within a film' for DreamWorks and Paramount's LEMONY SNICKET: A SERIES OF UNFORTUNATE EVENTS. They have also directed for the BBC's animated comedy show MONKEY DUST. Their commercial work has won them numerous awards and accolades including the Grand Prix Award at Cannes Lions, a Grandy at the Andys, an ITV Award for Best Commercial and two Golds at the D&AD awards. They were the most awarded commercial directors in the US and Europe in 2006.