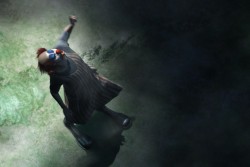 The Protagonist, the Auguste, is projected onto a huge screen of a picturesque cinema as a metaphor for the subconscious mind of the audience. He undergoes an existential development, dreaming of his counterpart, the white face clown and finally finding his true identity: the immortal archetype of the Trickster.

Alexander Pohl was born in Munich in 1978. In 2001, he moved to Berlin to study Animation at the film academy HFF Konrad Wolf in Babelsberg. He graduated in 2007, and has since been working as a freelancer. Since 2009 he has been a member of a newly founded Animationstudio in Berlin together with 11 talented alumni from the HFF Konrad Wolf Potsdam.

Director Alexander Pohl will be available for Q&A after the screenings.