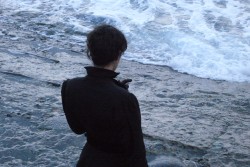 1910. Louis, 17, helps a wealthy stranger, Théodora, 40, to find the body of her husband, who shipwrecked. He drags her, at sunset, on his weak skiff. Their morbid hunt will lead them until sunrise.

Charlotte Erlih studied litterature and has teached Theatre at the University. She has directed 10 plays and was the assistant of director Coline Serreau both for the theatre and the opera. Charlotte has directed two short movies produced by Why Not Productions and she is currently writing her first feature film.

Director Charlotte Erlih will be available for Q&A after the screenings.