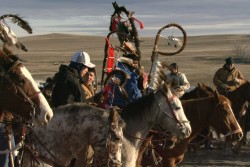 Kili Radio "Voice of the Lakota Nation" is broadcast out of a small wooden house that sits isolated on a hill, lost in the vast countryside of South Dakota. It's a place that's long forgotten; lying at the crossroads between combat and hope, between the American dream and daily existence on America's poorest reservation. Yet we find people like Roxanne Two Bulls, who's trying to start over again on the land of her ancestors; the young DJ Derrick who's discovering his gift for music; Bruce, the white lawyer who for thirty years has been trying to free a militant who's been fighting for American Indian rights; and finally John Trudell, an old AIM activist who's made a career for himself as a musician in Hollywood. Everything converges at Kili Radio. Instead of sending smoke signals the radio station transmits its own signals across a vast and magnificent landscape with a delightful combination of humor and melancholy. Native hip hop and broken windshields: pride has been restored - it really is OK to be Lakota. (Kili = Lakota: awesome)

Fanny Bräuning (1975, Switzerland) obtained her baccalaureate and studied cinema at the Zürcher Hochschule für Gestaltung und Kunst. She has traveled to New-Zealand, Australia and Laponia. She has worked as an assistant on numerous films and television productions. Her documentaries, MEINE MUTTER and PALOMA were shown at the documentary film festival, Visions du réel in Nyon, Switzerland. In 2004 Fanny co-founded "Distant Lights Filmproduktion GmbH". NO MORE SMOKE SIGNALS is her first feature-length documentary.

Director Fanny Bräuning will be available for Q&A after the screenings.