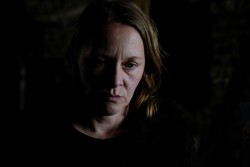 Laurie Colson was born in 1976 and lives in Liège, Belgium. She graduated from Certificate of Higher Education in Modern Languages at the Athénée Royal (Visé) in 1995, and from Graduat at the Arts Institut Saint-Luc (Liège) in 1999. She has also trained at The S.A.E. Institute, for Digital Film making (Brussels). She has worked on several short films as writer/director since "Incellar", including "Estelle", "Greenpainting", and "Beauty and the Beast". She is currently in production for an experimental film titled "Phagocytes".