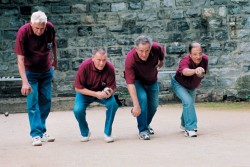 A tranquil little island hidden away under a bridge in Lausanne, the bowling club of La Boule d'Or is home to a team of pensioners who, under the direction of a choreographer, join in a very strange game.

Bruno Deville is a Belgian who works in Switzerland. His short films have won awards at several international festivals. He has worked on music videos, commercials and documentaries. Bruno is currently working on a screenplay for a feature film.