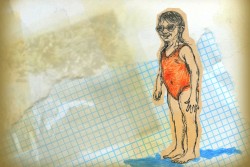 In a letter that she penned in 1941, Virginia Woolf wrote the words "soaring, roaring, diving..." to describe the range of human experience and life's joys and upheavals. This mixed-media animated film coopts Woolf's words as its title, and the animator and composer, who were born and raised in New Zealand, explore life's peaks and troughs through the use of drawing, collage, Super8 footage, and composed and found sounds. In the last few years, both artists lost their sisters, who were still young, to terminal illnesses, and the film investigates motifs of journeying, childhood memories, summer in the South Pacific, swimming and diving as metaphors, working through grief, and the proverbial glass half-full or half-empty question. The contrast between memory, with all its potential for tangential asides and playful, imagined sequences, and photographic recording, is a theme that runs throughout the film.

Miriam Harris is an artist and animator from New Zealand. She completed a Post Graduate Diploma in Digital Animation at Sheridan College, Toronto, and has degrees in fine arts and literature. She is a Senior Lecturer in Graphics and Animation at the Unitec School of Design, Auckland, New Zealand. She also writes about animation, and her essay on Len Lye was published in the book "Animated Worlds", an anthology of essays by international animation scholars. Juliet Palmer is a Toronto-based composer who grew up in New Zealand, and moved to New York in 1990 to work with Meredith Monk. She completed her doctorate in composition from Princeton University in 1999. She has composed sound and music for a number of performances in Toronto and Canada, as well as international projects. Her music has been described as "a genre-bending, groove-laden universe of humour and iconoclasm". Working in diverse media, her output ranges from chamber music to multimedia installations, dance, music theatre, opera and symphonic works.