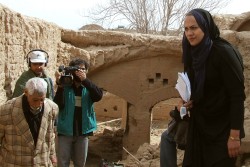 ONE DAY AFTER THE TENTH DAY

An old man who is given a camel to look after by the village people finds himself bonding with the animal after a few months.

Narges Abyar was born in Tehran. She studied Persian Literature and received her B.A. in this field. She has devoted most of her time to writing, which has led to the publication of ten books for children, young adults and adults. She has made one short film and one documentary.