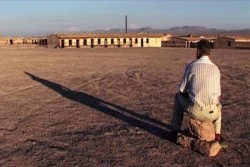 A boy travels to a saltpeter office with his family, to the city of Chacabuco in the Chilean desert, where he walks along the old buildings. The years pass by and, as the wind erases the days and hours from yesterday, the boy is now grown up, a lonely old man, and that old man decides to move to Chacabuco.