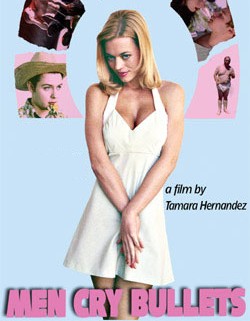 Enter the strange world of Billy, (STEVEN NELSON), an innocent young male ingenue, imprisoned by the memories of his past, who tries to redeem himself by performing on stage in drag each night as his mother in a seedy freak club. Unfortunately, one night his act is ruined in a drunken brawl by an insane cigar smoking writer named Gloria, (HONEY LAUREN). Instantly drawn to her, Billy makes the mistake of falling in love with this sexy and sadistic older woman who rapes and abuses him until he submits to her every whim. But Gloria's worst behavior doesn't kick in until her disgustingly beautiful debutante cousin, (JERI RYAN), arrives for a visit and decides to steal Billy away. So begins a twisted psychosexual roller coaster ride through three crazy minds filled with hysterically funny dialogue and violent emotions that result in a depraved menage a trois, the brutal butchering of a beloved pet, and a spontaneous cold blooded murder.

Despite being born in Canada to a Nicaraguan father, and an Irish mother, Tamara ended up being raised in the midst of the remote farmlands of Bakersfield, California. She began her career as a screenwriter in 1992 after pursuing an English Literature degree at UCLA. Afterwards, she spent several years as a screenwriter, optioning three of her scripts and selling one. In '95 she began directing her own work, with two of the short films she wrote and directed that year, The Slap and Baby Fat, premiering at the '96 Sundance Film Festival. The Slap went onto play in Critic's Week at the Cannes Film Festival, in Paris theaters through Canal Plus, and on television in seventeen countries, including the Sundance Channel in the U.S., and presently has just come out on video in France in a "Best of the Short Films" anthology.