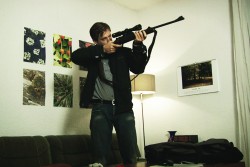 Living in seclusion from the rest of the world, Daniel Bauer goes about his job as a gardener in the botanical gardens. A rather inconspicuous young man who, however, regularly breaks out of his motionless daily routine and commits indiscriminate acts of violence. When he gets to know Jana, a forlorn young woman, a tentative relationship develops between the two foreign bodies. She sees everything in the shy Daniel that she always wanted from a man. Yet she doesn't have any inkling of his dark side. After a first successful date between Daniel and Jana, the situation escalates. On the morning after the date, he shoots a jogger. A reaction to the beginning love?

Thomas Sieben (born in Cologne in 1976) studied Politics at the Ludwig-Wilhelm University in Münster and Film and Photography at the Massachusetts College of Art in Boston, USA. Thomas worked was a producer with multiple production companies in Munich from 1999 until 2001. Thomas Sieben works as a freelance journalist, writer and director in Berlin.