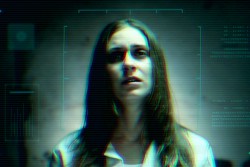 Sharon finds herself in a strange and dark place - an interrogation room. She is watched by a large camera eye at all times. As the machine questions her she reverts back to a dream world of her recent past. The calculating rational side collides with the organic and chaotic irrational side in this Experimental Schizo-Mystery-Thriller.

Michael Okum is a writer/director/editor/visual artist currently living in Los Angeles. His next project in development is a feature-length horror-thriller titled "Expressway to Your Skull". He is originally from New Jersey and enjoys the music of Les Baxter.

The elliptical nature of Sharon’s story provides a free form field for open interpretation of the visual elements in the film. Sharon’s reality, as we know it, is indistinguishable from her delusions. The places we see her inhabit may or may not be part of her fantasy life or the harsh reality of her illness. Therefore scenes alternate between spaces that are undefined and nebulous. Sharon easily passes through these realms because her mental state allows for such distortion.

Director Michael Okum and Production Designer Gina Rogers will be available for Q&A after the June 12th screening.