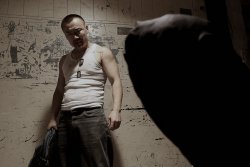 It is one thing to die for a cause, but what are you prepared to kill for?

Born in China and growing-up in Sydney, Australia, John Ma was always in love with the arts but never encouraged to pursue a career in the industry. But only when he kept finding himself on film sets all over the world, did he come to realize his vocation. Learning film making first-hand, John has worked across different departments of film production, from story development to on-set production and visual FX. Living in Sydney as an independent filmmaker, John works as a producer, director and photographer.