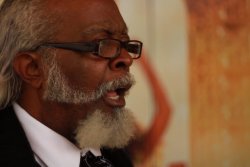 This is the story of the charismatic New York gubernatorial candidate Jimmy McMillan of the Rent is 2 Damn High Party, and his rise to international fame after his appearance on the 2010 gubernatorial debate. In what becomes an unforgettable journey, DAMN! is the only film to capture, as it all unfolds, the rise of a viral sensation and the media fixation that follows. It's a sometimes funny and sometimes disturbing first hand look at what happens when virality, fame, politics, media, and money get twisted into one entity. Early Press about DAMN! - "Considering that McMillan is a Vietnam veteran, martial arts expert and former postal work- in addition to failed gubernatorial candidate- here's guessing he has a Philippe Petit-like staying power. With facial hair." - Movieline

Jimmy McMillan of the Rent is 2 Damn High Party, Director Aaron Fisher-Cohen, Producer Kristian Almgren and Co-Producer Sam will be available for Q&A after the June 11th screening.