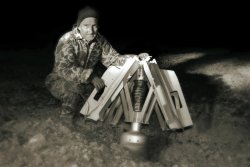 'Scrapper' explores a darkly enigmatic and brazen American outlaw subculture - a small clutch of survivalists and wild-eyed iconoclasts who earn a dangerous living scavenging bombs, missiles and other combat ephemera from the US Navy's Chocolate Mountain Aerial Bombing and Gunnery Range in Southeastern California. Rummaging over the 670-square mile live bombing range for spent ordnance, the scrappers find high-grade metals--aluminum, brass and copper--that are turned into cash at salvage yards. Often, this funds another week long meth binge. Inside their survivalist compounds and trailers, the scrappers share their insights into the dangers of scrapping, territorial disputes, national priorities, and the Chocolate Mountains' slide into a smuggling corridor for Mexican narcotrafficantes and coyotes (human traffickers). In sum, 'Scrapper' is an excursion into a lawless and militarized post-apocalyptic wilderness.

Stephan Wassmann lives in CA, U S A.

My partners Michael Digregorio and Olivier Hermitant and I fell under the weird spell of the Chocolate Mountain Bombing Range when we first heard the shock and awe resounding from its barren hills. It was on the eve of the invasion of Iraq and attack jets and helicopters streaked in from all directions to unleash live ordnance in five different impact areas. They were rehearsing their opening night on Baghdad. But when the first scrapper cracked open the door into his world and showed us a fresh harvest of cluster bomb casings from the range, we began the slide into a world of volatile and fiercely independent survivalists who were fuelled by wild-west grit, aluminum fever, crystal meth and scripture. Tracking down and building trust with them during the festering years of the Iraq war, when the rhetoric of anti-terrorism dominated the national discourse, took time and patience. But we hauled back as often as we could into the scrappers’ world of extreme survival, wanting to understand what gave them the nerve to shrug off the fear that gripped the nation and feed on the scraps of an ever more opulent banquet of war. Who were these elusive scavengers? Opportunistic war profiteers or western Robin Hoods? Potential domestic terrorists or wily patriots? National security threats or range vigilantes? We had to fly under the radar with them to find out. This documentary has gone through a number of significant evolutions, in turn more investigative, political, focused on the military. But "Scrapper" has since found its most authentic footing in the daily lives of these gritty survivors, riding shotgun into the vortex of their range and their mind-set.