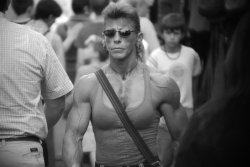 Sophie lives alone. She spends her time between small jobs and moving ...flats. She creates sculptures of her body to fill the empty space of her life.

Christophe Hermans (1982) is a film school graduate of the Institut des Arts de Diffusion of Louvain-la-Neuve, Belgium. Since graduating in 2006 Christophe has directed numerous short and documentary films.

At the age of thirteen, I started body-building with the clear goal of changing my own body. I wanted to be different… and I wanted other people to perceive me differently. Did I hide some vague unease? Or was it simply an urge ? I’ve filmed Sophie just as I would have filmed myself, which is to say through her silences, her pauses, her everyday life. I’ve filmed only what she’s wanted me to record. I’ve made this film because Sophie is unique and I’ve recognized myself in her. I decided to take on the role of an observer, so wishing to discover her.