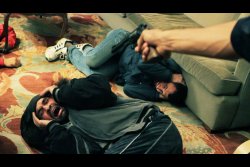 Ex-con Dame wants nothing more than to leave behind his life of crime. But when he gets into Gowanus Taxi Cab 83, he finds himself in a world of kidnapped Sikhs, Jewish cops, the Black Mafia,a rifle-toting-Oprah-loving drug dealer, and two of the dumbest criminals in Brooklyn. Will Dame have to revert to his old ways in order to save himself in this ridiculous comedy of errors?

Michael E. Wood spent his childhood building robots and playing bike tag in the streets of Brooklyn. He went on to study Mechanical and Aerospace Engineering at Princeton University where his senior thesis, "Camera Stabilization with a Stewart Platform", won the Enoch J. Durbin prize in engineering innovation. After graduating from college, Mike decided to move back home to Brooklyn to pursue his passion for filmmaking. Mike has worked in the film industry for the last 4 years as a freelance videographer, commercial PA, editor for a commercial production company, and as an intern for Spike Lee's production company, 40 Acres and a Mule. Mike is currently pursuing a master's degree from New York University's Tisch School of the Arts where he has written and directed 6 short films, including his latest, 'Cross Your Heart' and 'Gowanus 83'. He's currently developing his thesis film, a feature length comedy.

Director Michael Wood will be available for Q&A after the screening.