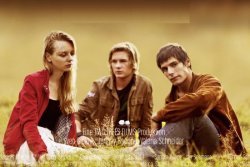 An accidental encounter between a young man and a couple turns into a game of light and shadow.

Jan Seemann grew up in Saarbrücken, Germany. After studying literature and history, he worked as a movie journalist for German television (PBS) and hosted a political radio talk show. Over the past years, Jan Seemann has written and directed several short films and documentaries. In 2011 he produced and directed "Summer knows", for which he could unite a cast of French and German actors. Jan Seemann lives in Köln, Germany and is currently developing his first feature film.

With 'Summer knows' I wanted to explore the idea of how easily an attraction can turn into repulsion and vice versa.