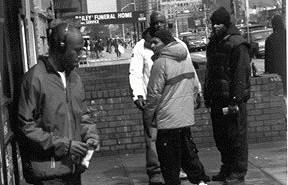 An urban opera about a man in the wrong place at the wrong time.

Originally, from Mt. Vernon, NY, Maurice Dwyer received his B.A. from Temple University in filmmaking. As an actor, he's appeared in many stage plays, independent films and guest starred in the CBS drama "Now and Again", for which he was submitted for Emmy consideration. His directing credits include For Charity's Sake, the award-winning WHOA (Sundance 2002), Cop Block produced as a semi-finalist for the Chrysler Million Dollar Film Festival at the Cannes Film Festival 2002, 3 Minutes, under the Fox Searchlight: Searchlab Program.