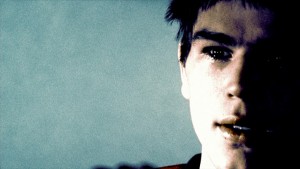 Member is a hypnotic, hallucinogenic, fast-cut, 15 minute swerve and screech around the streets of Los Angeles, driven by 19 year-old Gianni. You're not just in the car with him - you are inside his head. His mind has been tainted and twisted by LA - the ubiquitous ad campaigns that bang at his brain, the pressure to 'con-fucking-form', the desire to belong. Now he wants retribution.
Prowling in his snarled metal machine he is looking for the perfect vehicle - he's thinking maybe a BMW, Lexus, Mercedes - one that is breaking a traffic law so he can slam into it and claim his slice of insurance pie. Sucking in his favorite brand of carcinogen, the 'goodlooking corpse-to-be' lets vulnerability and vitriol spit forth, muttering his mantra: 'Let me no longer want what they have and let them always want what's mine.'

David is a US/Brit who studied topology at MIT but then became a film editor. He has cut commercials and videos for amongst others Tony Kaye, Ridley Scott, Spike Jonze, and Baz Luhrman. Member marks his directorial debut.

The film also serves a practical yet experimental purpose - "The decision to shoot Member was based on my desire to cut in ways which other directors don't require. There is always a point at which they say, Okay - enough. Just once I wanted to decide when I thought enough was enough."