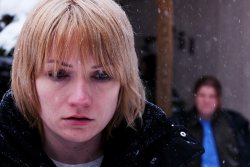 Set on a remote frozen lake in the Adirondack Mountains, "And Winter Slow" is the story of a young woman trying to escape the burden of caring for her ailing husband.

Brian Lannin was born in the south suburbs of Chicago. He spent most of his life as a classical and jazz drummer. Playing in clubs from a very young age, Brian was introduced to a variety of characters and artists, which instilled in him a hunger for stories that eventually led to a passion for filmmaking. He left Chicago for New York to be in the center of independent filmmaking where he enrolled in NYU's Graduate Film Program.

Director Brian Lannin and Producer Mollye Asher will be available for a Q&A after the screening.