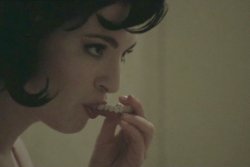 In the desolate landscape of the American Northeast, Carol, an alluring woman living on the fringe, carries out her quiet routine. Even as she lands an interview for a job as a waitress, she gets a call for the work she can't refuse. In the ensuing racy encounter, her true identity is exposed.

Adam Keleman grew up in Woodland Hills, CA, where he quietly observed the niceties of the suburban way of life. In 2006, Adam graduated from UC San Diego with a degree in Film and Video production. At UCSD, he developed a passion for story-telling through film and writing. He began to hone his writing skills as the LA film correspondent for SOMA Magazine in 2007, interviewing acclaimed directors and actors including Evan Rachel Wood for "The Wrestler" and Freida Pinto for her breakthrough role in "Slumdog Millionaire". Adam has also contributed to AOL Moviefone, SLANT, ARTISTdirect, and Bunker Hill. In Spring 2009, Adam wrote, directed and produced the short film 'Going Back,' (BFF 2010). In 2011, he worked as a research assistant and transcriber on the Vito Russo documentary entitled 'Vito' for director Jeffrey Schwarz, as well as working on the production team for Ira Sachs's new film 'Keep The Lights On.' He currently resides in Brooklyn, NY, where he is developing two feature-length scripts, and just wrapped production on Adam Baran's new film 'Jackpot' as a producer.

Writer/Director Adam Keleman and lead actress Dakota Goldhor will be available for a Q&A after the screening.