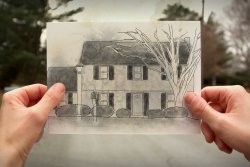 PLACES OTHER PEOPLE HAVE LIVED

a mixed media exploration of the relationship between memory and place, as examined through the sale of a childhood home. Using old photographs, recorded interviews with family members, and multiple animation techniques, the film deconstructs room-by-room a house that was a family home for more than 25 years. What begins as a biography of a house, told through bittersweet and sometimes humorous personal anecdotes, ultimately raises larger questions about the emotional content of physical spaces, and what happens to our histories when we leave those places behind.

Laura Emel Yilmaz is a filmmaker and animator whose films have screened in numerous festivals around the world, including Animafest Zagreb, Ann Arbor Film Festival, Seattle International Film Festival, and CFC Worldwide Short Film Festival. Her most recent film "Places Other People Have Lived" premiered as Juror's Stellar Animation (best of festival) in the 2012 Black Maria Film + Video Festival tour. Laura holds a BA from Harvard University and an MFA from the University of Southern California, where she was an Annenberg Fellow in Animation & Digital Arts. She currently works as an animator and animation director in Los Angeles, California.