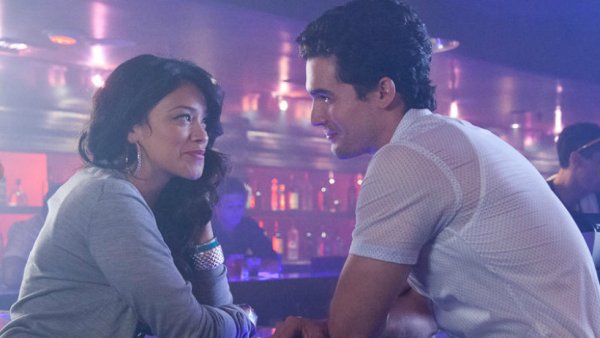 SLEEPING WITH THE FISHES

SLEEPING WITH THE FISHES is a comedy which captures one girl's journey of self-discovery and the dynamics of her zany family. With its fair share of "ay dios mio" and "oy vey" moments, the film comes to life with colorful characters and one-liners that can only be found in a Latino Jewish home in Brooklyn. As SLEEPING WITH THE FISHES opens, it's safe to say Alexis Rodriguez Fish (Gina Rodriguez) has seen better days. The recent death of her cheating husband has left her both broke and broken-hearted. Trying to climb out of debt, Alexis has been reduced to juggling humiliating odd end jobs including a walking meatball hero and phone sex operator. Unhappy with the direction she is headed, Alexis struggles to find her way as the life she once knew, unfortunately no longer exists. When she receives an unexpected call from her quirky, comic-book obsessed older sister, Kayla (Ana Ortiz), to come home for a distant aunt's funeral-Alexis realizes her life might just get worse before it gets any better. Dreading the notion of going home, Alexis fears admitting to her family, especially her well-intentioned but overbearing mother, that her life is "un desastre." (a disaster) Once home, Alexis is immediately confronted by her mother (Priscilla Lopez) about her life and the choices she's made since her husband's death. Suddenly re-immersed in her Latin and Jewish roots, Alexis feels like a fish out of water. With family tension quickly growing, Kayla tries to get Alexis back into her former career as a party planner with a job helping coordinate a superhero-themed Bat Mitzvah. Not exactly the answer to her prayers, Alexis is hesitant to take on the project. But with encouraging words from her father (Tibor Feldman), she ultimately gives in-a decision which leads to a promising new romance with Dominic (Steven Strait). With love on the horizon and a new found understanding for her dysfunctional family, Alexis is finally able to let go of her past and begin defining her own future. A slice-of-life, SLEEPING WITH THE FISHES features an incredible Latino cast of established and rising talent who come together to tell a relatable and comically poignant story.

Nicole Gomez Fisher is the writer and director of Sleeping with the Fishes, an official selection of the 2013 Brooklyn Film Festival. She's just finished writing her second feature, Good Egg, an action comedy, as well as spec scripts for Modern Family and The Big Bang Theory. Nicole has received international recognition for her comedy writing. Both Sleeping with the Fishes and her original sitcom, This is My Life, won praise at recent screenwriting competitions. Starting out as an actress and stand-up comic from Brooklyn, Nicole is a founding member of The Hot Tamales Live!, the Latina comedy tour produced by Eva Longoria. She went on to write and perform her acclaimed one-woman show, Mixed, at the New York Underground Comedy Festival. Nicole's film, television and theater acting credits include a recurring role on 24, General Hospital, Empire (an Official Selection of The Sundance Film Festival), Frankie and Johnny are Married (starring Mandy Patinkin), Habla for HBO Latino and Birth Marks (part of The Ensemble Studios Marathon Series). Nicole's work has been featured in The New York Times, Time Out NY, Backstage, Theater Mania and 15 Minutes Magazine. Sleeping with the Fishes marks Nicole's directorial debut.

Director Nicole Gomez Fisher and Producer Courtney Andrialis will be available for a Q&A after the screening.