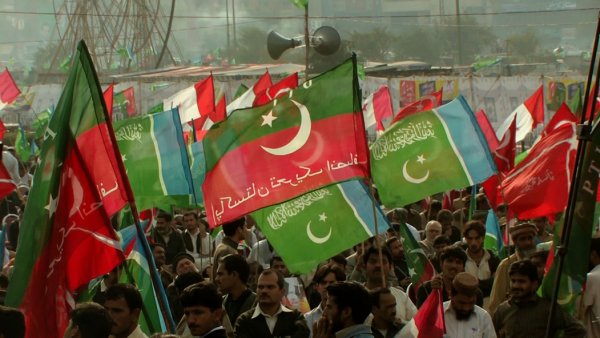 Without Shepherds is a rare and essential glimpse into six brave lives trapped in the turbulent waters of Pakistan today. In wake of Benazir Bhutto's assassination, in the midst of the first national election in ten years, each of our characters takes their first steps in bold new directions of their own: a cricket star building a new political party, a female journalist working behind Taliban lines, an ex-mujahid seeking redemption, a trucker crossing dangerous territory to feed his family, a supermodel pushing feminism through fashion, and a subversive Sufi rocker using music to heal. Filmed by a team of Americans and Pakistanis over two years, Without Shepherds cuts through alarmist media depictions of the country to celebrate the bravery of its people. It is a portrait of this moment, where Pakistan sits at the center of a deeply broken world, and of those inside the country who are trying to find a way forward for all of us.

Cary McClelland is an artist and human rights advocate. He recently worked with Google and WITNESS to launch YouTube's Human Rights Channel, dedicated to giving voice to citizen journalists around the world. Before that, his work spanned Africa, the Middle East, and East Asia. He has trained former child soldiers to be television journalists in the Eastern Congo, directed conflict transformation programs in liberated East Timor, worked alongside opposition activists in Zimbabwe, and worked on advocacy programs in Egypt, Syria and Burma. He has a BA in Screenwriting from Harvard, a Masters in International Affairs from Columbia, and is pursuing his JD at Stanford, where continues to dedicate his work to building bridges between cultures.

Director Cary McClelland will be available for a Q&A after the screening.