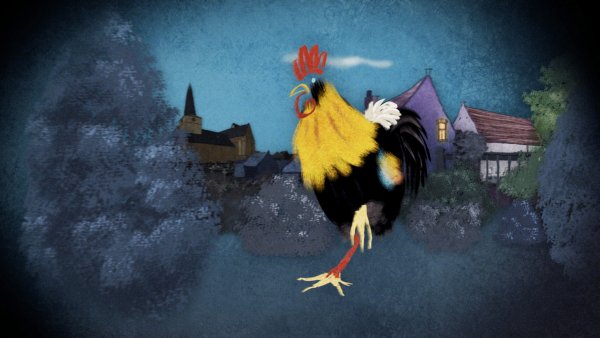 Marcel is a rooster who belongs to a friend, Ann, in Tervuren, a suburb of Brussels, Belgium. During a bird flu scare in Europe a few years ago, the provincial government issued a requirement that domestically kept fowl be killed. Ann initially tried to put Marcel to sleep with increasingly large doses of sedatives in his food, but every morning he was in his tree at dawn, vigorously calling out 'cuculurucoo!' She failed in multiple timid attempts to kill Marcel, the order was lifted and she celebrated by obtaining three chickens for Marcel. He had a son who, when he grew, became territorial and fought his father. Marcel was blinded in one eye and fled his kingdom. He returned eventually, fought and killed his son to regain his territory. Most recently, he survived an attack by a fox. Marcel simply refuses to die.

Tom Schroeder has been making hand-drawn animated films since 1990. His films have been broadcast on Independent Lens, the Sundance Channel, Canal + France, SBS in Australia and CBC in Canada and have screened at the American Cinematique in Los Angeles and Anthology Film Archives in New York. The films have also played widely on the international festival circuit, including at Annecy, Rotterdam, Sundance, Ottawa, South by Southwest and Edinburgh, and have won over thirty festival awards. Tom received Minnesota State Arts Board Grants in 1991, 1999 and 2006, Jerome Film and Video Grants in 2000 and 2004, McKnight Fellowships in 2006 and 2011 and Bush Fellowships in 1997 and 2008. He has directed commercials for Kashi, Samsung and Hertz Car Rental and is currently represented as a director by Global Mechanic, Vancouver, Canada.