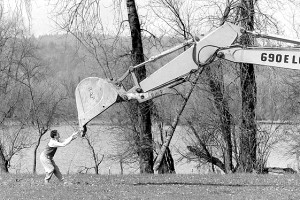 Modern Daydreams is a suite of four Chaplinesque films exploring the theme of movement engendered by day-to-day life. They are post-modern comedies with silent film sensibilities revealing much of the movement about us to be metaphors for both romance and isolation. Treadmill Softly- A man reaches aerobic heart rate at the gym when he falls for a hunkette. Islands in the Sky- Four people weave fifty feet in the air atop four cherry-pickers, aloft and aloof in their ivory towers. Unleashed- A cubicle-bound Dilbert-ditto gets in touch with his inner puppy. Deere John - A man and a twenty-two ton John Deere excavator dance a dance of discovery, fulfillment, and eventually, the loss that any diesel-based relationship must suffer.

Prior to becoming a filmmaker, Mitchell Rose was a New York-based choreographer. His company toured internationally for 15 years. Eventually he was drawn more to visual media and graduated from The American Film Institute as a Directing Fellow. Since A.F.I. his films have won 84 festival awards and are screened around the world. The New York Times called him: "A rare and wonderful talent." The Washington Post wrote that his work was "in the tradition of Chaplin, Keaton, and Tati-funny and sad and more than the sum of both." Mr. Rose tours a program called The Mitch Show, an evening of his short films together with audience-participation performance pieces. He toured The Mitch Show in Kosovo as a U.S. State Dept. Cultural Envoy. Mr. Rose is currently a professor of filmmaking at Ohio State University.