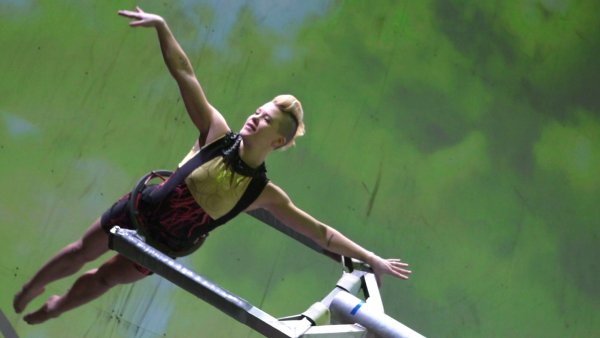 Born to Fly harnesses the thrill and energy of Elizabeth Streb's Brooklyn-based STREB Extreme Action Company. Inter-cutting archival footage from decades of STREB performances with verité moments between Streb, her partner Laura and their collaborators, the documentary follows Streb over the course of a year as she reflects on her influences, evolution, and inventions, all while preparing for her greatest public performance. Along the way, Born to Fly captures the lives of Streb's dancers - gladiators infused with her theory of movement, who walk on walls, dive through glass, move so fast they disappear, and fly. The film culminates with Streb and her dancers taking the world by force at the London 2012 Cultural Olympiad. This grand and surprising display, enacted as public performances on landmarks like the London Eye, exemplifies both Streb's and the film's philosophies: You must risk falling if you want to fly.

Catherine Gund is an Emmy-nominated producer, director, writer and organizer. She founded Aubin Pictures in 1996 in order to produce and promote media work focused on arts and culture, HIV/AIDS and reproductive health, the environment, and other social justice issues. Her films have screened around the world in festivals, theaters, universities, and museums, as well as on television. Gund's most recent project, What's On Your Plate?, is a critically-acclaimed documentary about kids and food politics. Her other films include Motherland Afghanistan; A Touch Of Greatness (Emmy-nominated); Making Grace and On Hostile Ground.

Director Catherine Gund and choreographer Elizabeth Streb will be available for Q&A after the screening.