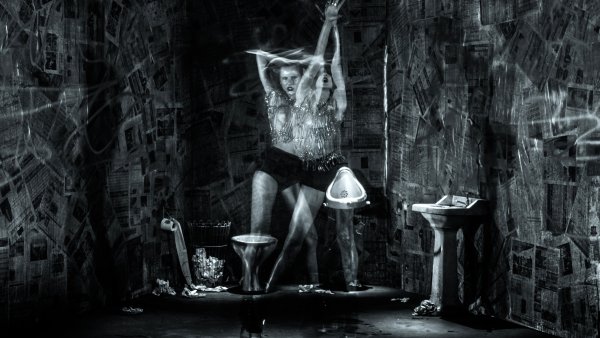 Marcos Mello develops the technique of 'motion light painting' to tell 'The story of the cathartic encounter of Sid Vicious and Nancy Spungen's souls'. The work sees two of the most memorable punk figures transformed into a mesmerising, black and white short which juxtaposes the fluidity of the light against static, jolting models.Starring Top Models: Alfcia Kuczman(Nancy) & Isabel Hickmann (Sid)Produced by Cavallaria

Marcos Mello started his professional artistic career through visual arts and comic books since 15 years old. Later he completely dedicated to cinema, working as an actor and director on short and feature films in Brazil. In 2007, he founded Cavallaria, an artistic studio that is the precursor of fashion film in Brazil. The studio makes films for Vogue, Elle, Marie Claire, GQ and big brands segment, using RED Digital Cinema movie frames as stills. Mello made the first 3D fashion show in the world in 2010. In 2013 his latest short film 'The Iron Maiden' participated in the Short Film Corner in Cannes. He debuted with SHOWstudio in 2013 with the film Punk Love in which he developed a unique technique 'Motion Light Painting'

When did SHOWstudio's invitation to speak about PUNK. An honor and incredible theme due to be a visceral movement of that generation. And one of the most genuinely attitudes PUNK was the suicide of Sid Vicious pro of his love and death pact with Nancy Spungem. The letter left for him and the theory of transformation PUNK LOVE, is a free interpretation of postmortem Sid & Nancy meeting, the turbulence of the essence of being, identity of persons, the feelings, the relationship to the reunion and transformation in light . With this concept of everything being light, to capture the "soul" of the characters have developed a unique technique that I registered Motion Light Painting ® to try make the Romeo & Juliet of PUNK.