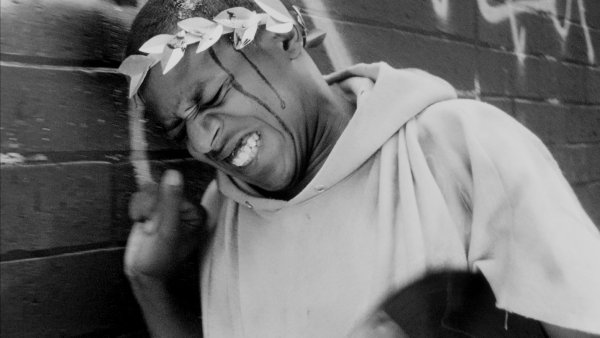 VOCABULARY OF THE MYSTERIES

Hephaestus, a young god, is cast from Mount Olympus after losing a dance battle to his father Zeus - the king of the universe. Before his exile, Hephaestus managed to steal a record from the king - a mysterious vinyl with powers unheard-of. Vowing never to return to the heavens, Hephaestus constructs the beautiful Ladybot - our bad-ass automaton heroine. When he gives the record to his magical iron bride, they build a home to rival Olympus in the broken slums of Earth. But to defy Zeus is to feel his wrath...

Jacob Shanks Kindlon is a filmmaker from Albany, New York. He currently resides in Echo Park, Los Angeles. His previous film, Vocabulary of the Mysteries, was awarded grants by the Philadelphia Independent Film and Video Association and The Puffin Foundation. The film won the Audience Award from the Brooklyn Film Festival, and the Best Student Film Award from the Philadelphia Independent Film Festival. His first film, Necropolis, has been screened overseas in Rome, Italy, and Tamano, Japan, and has been accepted into a number of national film festivals. Jacob and his production company, the SuperPAC, are currently producing an anti-comedy mini-series in Echo Park entitled: Makeson Drinxson Dirty South Liquor Presents: MasterP's Theatre.

This film is an anthem for those who want what they cannot have. For those who have heard the bittersweet song of impossible love, and dance to its alluring rhythm. A film for those who throw that sweet, sad tune on repeat, and turn the volume up. For those who think they know the steps to their own destiny better than the gods that made them. Let us jam together. Let us dance our dance with the gods. Let us chase the impossible as far as it will take us, to the edge of the universe, to the place where time bends back on itself, to the place where the very fabric of reality becomes a loop. For those who have moved their hips to this same impossible song, and want to keep on moving to it, no matter what the cost - This picture is yours.

Director Jacob Kindlon and Cinematographer Zachary Auron will be available for Q&A after the screening.