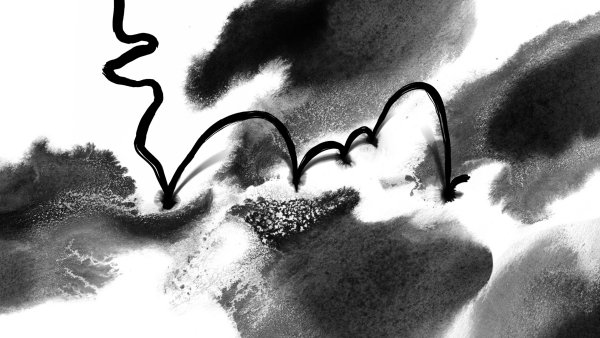 Abstract ink drawings seem to come out of nowhere. Following a secret choreography, they take on characteristics and moods of the music and narrate a story that appears to be laid out in the music. The interplay of timid encounters and dynamic pursuits, the agile lightness and confrontation, awakens a multitude of associations e.g. of birds, plants or the under-water world, which in turn stimulates many different emotional impressions.

Maja Oschmann (*1975 in Kassel, Germany) is an artist and drawer. She studied at the Kassel School of Art and Design, was awarded the Otto-Braun scholarship, and sold her works at the Artothek Art Collection in Kassel. For many years she has focused her analysis on the relationship between drawing and music. This is reflected in her multidisciplinary projects: at the opening event of the Kassel Music Festival (2005), and with the contemporary composers Diego Jascalevich (2006) and Peter Swinnen (2008). In 2009 she founded a private school of drawing and accepted a teaching post at the Kassel School of Art and Design. Maja Oschmann has co-directed VIRTUOS VIRTUELL (Virtuoso Virtual) with Thomas Stellmach from April 2010 to February 2013. This is her first film.
Thomas Stellmach (*1965 in Straubing, Germany) is animation director, producer, author and animator. Amongst 50 international awards for his independent productions, in 1997 he received the Academy award (Oscar®) for the stop-motion film Quest. He studied animation with the cartoon artist and professor Paul Driessen at the Kassel Academy of Arts (Kunsthochschule Kassel). In 2000, after completion of his artistic studies, he founded together with two partners the animation studio "Lichthof - Film & Animation" in Kassel and until 2008 he produced for TV and advertising. At the beginning of 2009 Stellmach left the company to focus his work on artistic animation projects. VIRTUOS VIRTUELL (Virtuoso Virtual, 2013) is his first independent film after the study.

It is our great pleasure, that our film VIRTUOSO VIRTUAL is part of the Brooklyn Film Festival. When we began to produce this experimental film, we didn’t really expect the hard work of three years. But every day there was an excitement like an adventure of searching, discovering and enjoying, which advanced and motivated us to finish this project. Now the similar hard work is needed to distribute our artwork around the world. We hope, that you will share our emotional experience while watching this 8-minutes film. Thomas Stellmach and Maja Oschmann