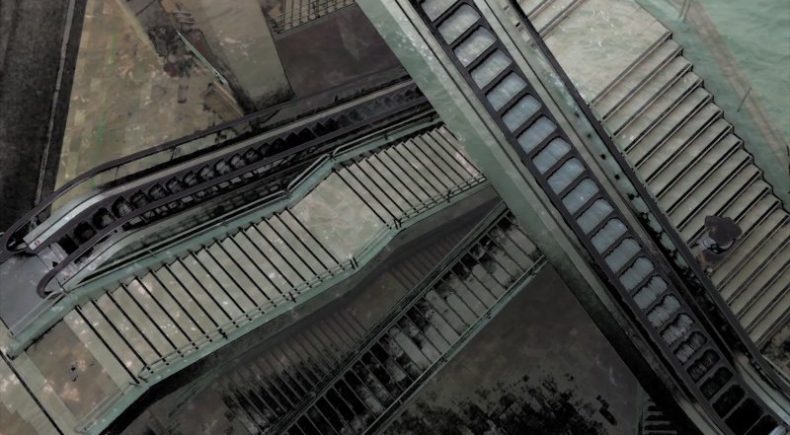 Simple in structure and complex in form, A Lingering Question is a film that obliquely presents the viewer with a world of perception that is in conflict with the real. It starts with the normal and ends there too, but in between we find ourselves in a place that seems purely of the psyche. Stairs going nowhere and a churning sea are all we know, no context or reason given. The movement through the film is of a subconscious movement, a memory interrupted by the real. Shot entirely from overhead. It gives a feeling of dislocation as we look forward at the screen while looking down at the image. The film presents an experience rather than a story.

Kenneth Feinstein is an award winning film maker,artist and theorist living and working in Singapore. His work has been exhibited at various film festivals, museums,and galleries around the world. The themes of Ken's work have tended to focus on issues of memory, personal and cultural. His work has used images from mass media as well as those based on our relationship with the natural in the city. Ken's aims is to be able to present his own space and time in to the viewer's body as a physical experience. His intention is to reinvigorate the viewer's understanding and participation in a culture dominated by mediated images and meanings, eventually shifting to an experiential relationship to the world around her/him. Kenneth has a PhD in media philosophy from the European Graduate School (EGS). He teaches interactive art and film at Nanyang Technological University in Singapore.

My work is interested in how daily life reflects our relationship to otherness. How do we interact with others and how it reflects our ethics. I do this through the creation of abstract films that bring out the relationship in a n abstract and general way.