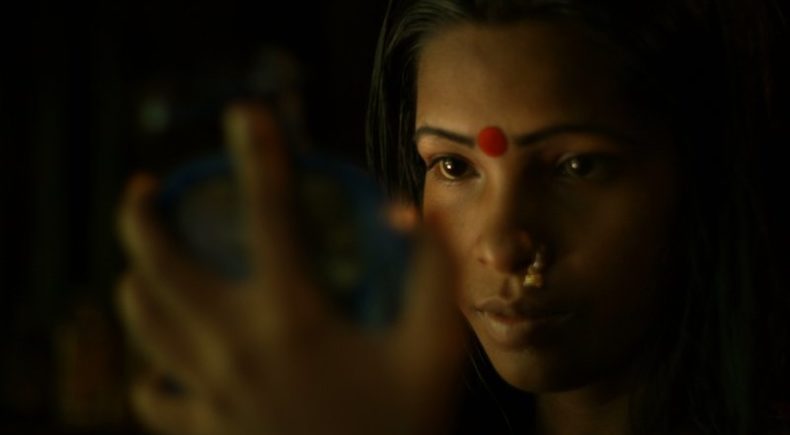 Summer 2014. Rural Bangladesh. "I came from Heaven. I came to destroy all bad things in the world. I'm a police officer. I'm a flower angel. I got a job at the police station. I will punish them. I will put them in jail.". This is the story of a girl and the tragedy that changed her life.

Francesca Scalisi (1982) is an Italian director and editor. Mark Olexa (1984) is a Swiss director and producer. They are based in Fribourg, Switzerland, where they run the film production company DOK MOBILE. Their academic background in Fine Arts is visible in their works, where social commitment and intercultural curiosity are blended with an artistic point of view. In 2015, they directed and produced short film «Moriom», which received the Special Mention at the Winterthur Kurzfilmtage and was screened at IDFA, Tampere Short-Film Festival and Thessaloniki documentary film festival, among others. Their first feature length documentary «Half-life in Fukushima» was shot in Japan in S16mm and was screened at Vision du Réel and at Hot Docs international documentary festival. They are also the creators and the artistic directors of the "Flying Film Festival", the first festival in the world to be held entirly in the sky. The "Flying Film Festival" is a short-film competition in partnership with SWISS Air Lines, with the aim of promoting short-films to a wider audience.

When we met Moriom for the first time, we were filming our feature-length in Bangladesh. This beautiful girl was wading through a river, lifting her elegantly embroided skirt in order to keep it dry. We were struck by her daring movements and her enigmatic beauty. Clapping her hands, she called our attention. We were enchanted by those mysterious gestures. Suddenly, we realized that she was wearing a cuff on her left ankle. Some kids were throwing stones at her, while her mother was trying to take her back home. We decided to take a break from the shooting of our documentray and started looking for this girl, eager to know more about her. This is the story of our short documentary: the agony of Moriom, a young Bengali woman and her lonely fight for freedom. This short-documentary compresses in 12 minutes a powerful drama and an unpredictable conclusion. Shot with extreme proximity and precision, it investigates the faces of the protagonists, as if searching for a hidden truth.