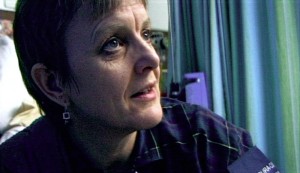 Kissed by Angels is an intimate window on one woman's experience of breast cancer. Combining hyper-reality with surreality, this lyrical documentary features Caroline, 46, an actor and psychotherapist,who must confront a mastectomy and an uncertain future. She faces a grief that spills into her sexuality and self view as a woman, a grief that is intensely personal yet shared by too many women each year. You are gently drawn into Caroline's story by her warmth, openess, and sense of humour as she talks to us from her home and hospital.

Documentary film maker Daniela Zanzotto is a director, producer and camera woman on her films. With little training in film making, Daniela she set off to Paris in 1997 to make her first documentary"If the Walls Could Speak" (52 min) which was widely screened at international festivals. Daniela's second documentary "Kissed by Angels" (BiFF 2002) was transmitted on the Sundance Channel and Channel 4, UK.