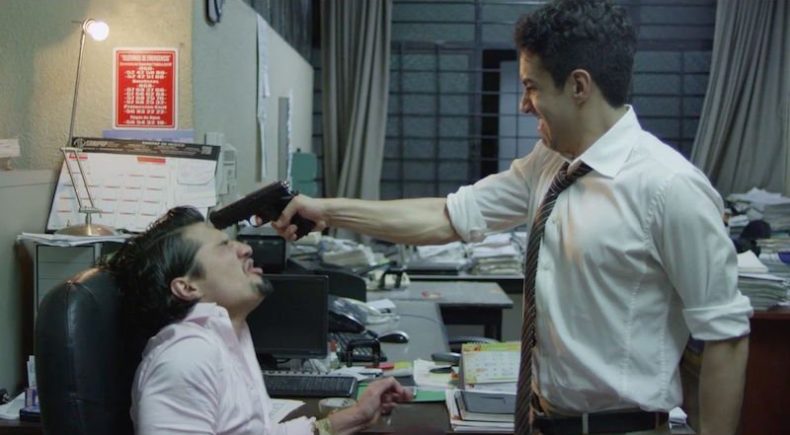 Hernandez leads a miserable life under the pressure of his pathetic and unbareable boss, Peralta. After a chain of lay offs from the company, Hernandez's worst nightmare is about to come true. Peralta is waiting for him in his cubicle, ready to let him go. But Hernandez won't go down without a fight, and tonight, he's ready to negotiate... with a gun in his hands. 'Suck it, boss' is a dark comedy about revenge, bullying and honour, between hours from 9am to 7pm.

Joe Rendón studied comunications at the Universidad Iberoamericana in Mexico City, specializing in Filmaking. He then studies at La Femmis, Paris, in a filmaking course imparted by The New York Film Academy, while at the same time studying the acting carreer at CasAzul to further develop his knowledge as a theater director and to direct actors. He begins working as a Writer / Director in 2007, with his shorts "Rocco", "Pepeneitor" y "Omisión", who were official selections in national and international festivals. Ever since, he's directed music videos for diferent artists, as well as publicity ads for brands such as FUNAM, Nestlé, Huggies, Kleen-Bebé, Kotex, Pétalo, Warner, Green Peace, etc. winning national recognition and prizes. In 2012, "Aquellos Ojos Verdes" is official selection in national (Guadalajara, Guanajuato, Monterrey) and international (Tenerife, Puerto Rico, Aguilar del campo, etc) festivale, ending his run with an amazing participation at the Short Film Corner in Cannes 2012. As a screenwriter, he's recognized in 2010 with a development deal by IMCINE to write his first feature. Also in 2012 he publishes his first book, "Postales, la ciudad de la Nostalgia" (Postcards from a nostalgic city). During 2014 he develops 2 tvseries for Filmadora Nacional (Después de Lucía) and HBOLatino as head writer, with one (Acapulco 67) being selected by IMCINE for a 2014 development workshop of national competition. In 2014 he co-writes with Joserra Zúñiga and directs the micro-theater play "Huevos, jefe" with Daniel Tovar & Ricardo Polanco. Afterwards he directs two more plays, "Julio" y "Puros Cuentos" with recognized mexican actors, and having great box office runs. In 2015 he writes and directs the web-series "Cositas de niñas - Miami" for Univisión, produced by Dirty Kitchen (Colombia). He's developing another web series called "Adulto Contemporáneo México" with Dirty Kitchen & Rojo Films, as well as his first feature film with Filmadora Nacional.