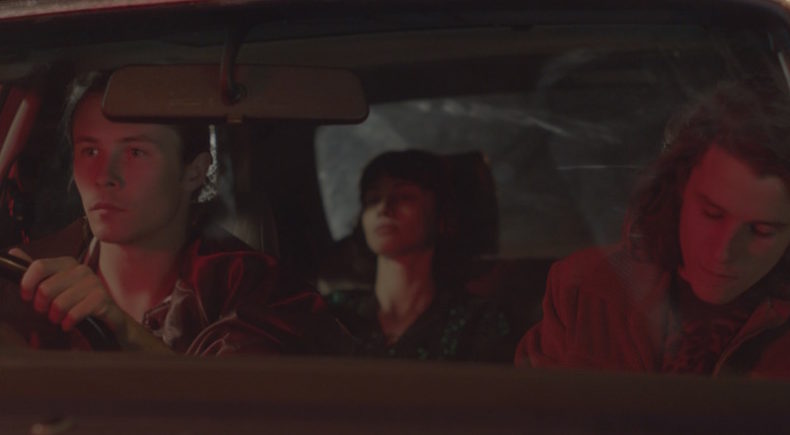 17 year old Pixie is a tough-talking, wild and beautiful hedonist. In a dead end seaside town on the British coast, she and her friends have spent their summer delving deeper and deeper into a strange new world of experimentation. In this timeless place somewhere between the sea and the land, values of love and intimacy grow increasingly distant, and cold, casual sexual exchanges have become the norm. As the end of the summer nears, the arrival of an unfamiliar young boy, Blondie, signals a change in the group's cyclical routine. His innocence and peculiar strength cause Pixie to question her own motivations as she begins to struggle with feelings she's never experienced before. This is a coming of age story at once unique and entirely familiar; a haunting love story of a disaffected youth.

Soon after graduating in Film from the University of Westminster, Sara Dunlop was named one of the Top 25 Directors to Watch by Creativity Magazine. She started her career in advertising, and her multi award-winning first short 'Big' for the Big Issue was met with critical acclaim both within both the commercial and film worlds. 'Billboards', an early commercial for Sky, also received British Arrows and Creative Circle nominations. Sara later co-wrote and directed several short films including 'High' for designer Jonathan Kelsey and 'Where's your line?' for crisis centre The Havens, which was awarded a Cannes Lion and four Golds, including Best Direction and Best Actress at the 2011 British Craft Awards. 'She'll Learn', Sara's documentary for Plan, was also shortlisted for a Cannes Lion in 2013 and 'The Wait' for Vodafone picked up three Bronze awards at the A-List Hollywood Film Advertising Craft Awards. She co-wrote Dreamlands with screenwriter James Chappell.

I’ve always had a fascination with that time in your life between being a child and being an adult and what that feels like. Maybe it stemmed from those teen films that I loved when I watched them in the 80s, like The Breakfast Club. It’s a beautiful time and I wanted to make a film that was beautiful but that also dealt with the problems of being a teenager, particularly now. Young people are so exposed to sex these days - online and through social media - and there’s huge pressure on them to be more sexually explicit in their actions. I wanted to explore what effect that could have, so I came up with this imaginary scenario of a teenage dogging scene in a dead-end seaside town. I didn’t want the film to feel gritty or miserable. I love the idea of a ‘beautiful/ugly’ aesthetic. This film is all set on the run down Kentish coast, around Margate, which, for me, epitomises that idea. It’s not a big, grey city, but a place that used to be glamorous and aspirational and has now fallen into disrepair. I think there’s a real beauty to that. I also love the feeling of space a place like that gives you; the ability to step back and see things that you just don’t get in a city. One half of the seaside is just open space as the land falls away. I definitely wanted the presence of the sea to be something you feel when you watch the film. I hope that the characters feel familiar to people. I wanted the film to feel timeless in everything from the set design, to the clothes, to the locations. We’ve all been a teenager at one time, and know the feeling of constantly walking the line between seeming strength and real vulnerability. Pixie’s character feels like she’s in control at the beginning of the film, but when Blondie turns up everything starts to fall apart. He feels like he’s from another time, another world, and he makes her question herself. I wanted people to go on a bit of a journey with her; we meet her at a time when everything is about to change for her.