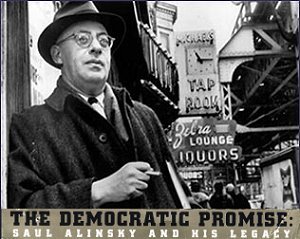 "I tell people the hell with charity, the only thing you'll get is what you're strong enough to get." -- Saul Alinsky The "Democratic Promise," narrated by Alec Baldwin, tells the inspiring story of legendary community organizer Saul Alinsky and his modern-day legacy. From the late 1930's until his death in 1972, Alinsky led the movement to empower disenfranchised communities through collective action. Today, hundreds of community organizations have taken up this challenge and are re-shaping America's body politic.

A veteran documentary producer, Bob Hercules is co-owner of Media Process Group, a Chicago-based production company. His credits include "Baseball's Heirlooms" and "Did they Buy It?," an examination of U.S. media coverage of Nicaragua's 1990 national elections. He was a frequent contributor to the PBS series THE '90S. A former chairperson and board member of Deep Dish Television Network - the country s only grassroots satellite network - Hercules is a co-founder and past producer of the cable series "Labor Beat".

Bruce Orenstein is a filmmaker and executive director of Chicago Video Project (CVP), a non-profit production company that produces videos for advocacy and community-based organizations. Orenstein is also a former community organizer in the Alinsky tradition, having organized in Chicago, Seattle, and Indiana.